What is GPS Time?

GPS time is a time scale maintained by the atomic clocks of satellites and ground control stations of the Global Positioning System (GPS). It consists of a count of weeks and seconds of the week since 0 hours (midnight) Sunday 6 January 1980. 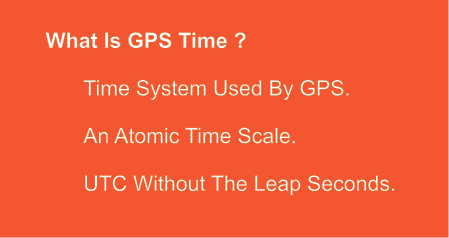 GPS time is a continuous time scale and does not adjust for leap second insertions. It therefore diverges from UTC at the introduction of each leap second.

Time is represented in different ways. Local time is the current time in your locale or region. It is affected by your locations time zone and daylight saving time.

Local time is calculated from UTC time, but is adjusted for time zone and daylight saving offsets.

UTC, or Universal Coordinated Time, is not affected by time zones or daylight saving. It is the same anywhere on Earth, regardless of location. UTC is periodically adjusted to acommodate leap second insertions.

The GPS system consists of a constellation of Earth orbiting satellites. Each satellite is fitted with a highly accurate atomic clock, which is periodically synchronized by a ground control station located at USNO, Colorado.

GPS time is the atomic time scale maintained by GPS satellites and the ground control stations used to synchronize the GPS system. 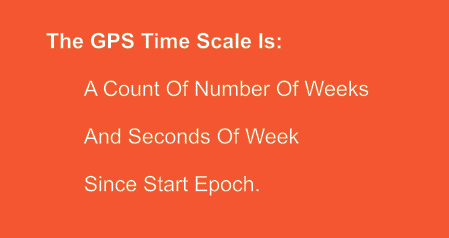 The time scale is a count of the number of weeks, and seconds of the current week, since an epoch. The start epoch was 0 hours (midnight) Sunday 6-Jan-1980, when GPS time was 0.

GPS time is continuous and is not adjusted to take account of leap seconds. As leap seconds are introduced over time, GPS time diverges further and further from UTC. As of March 2019, the GPS time scale is 18 seconds ahead of UTC.

In order to be more useful for timing applications, GPS messages contain an offset between GPS and UTC time which allows current UTC time to be calculated by a low-cost ground based receiver.

GPS time progresses uniformly, it is unaffected by leap seconds. Therefore, at the introduction of each leap second, it diverges from UTC.

On 1 January 1980, GPS and UTC time were the same, the table below shows the divergence of GPS time from UTC since then.

The GPS system maintains time as a count of weeks since 6 January 1980. It stores the week number in a 10-bit register.

However, a binary 10-bit register can only count up to 1024 before it rolls over back to 0. Therefore, every 1024 weeks, or 19.7 years, the week number register will revert to 0 beginning a new epoch.

Some older GPS receivers may therefor revert back to 21 August 1999 on 6 April 2019. This is known as the GPS week number rollover issue.

Other GPS receivers allow a message to be sent to the receiver to adjust the epoch start date manually. In this manner, provided a new epoch start date is periodically set, a rollover will be avoided.

The GPS system is currently undergoing a multi-billion dollar improvement and upgrade program.

As part of the upgrade, the updated message types (CNAV and MNAV) will switch to a 13-bit week number. This allows 8192 weeks or 157 years between week number rollovers.

How Accurate Is GPS Time?

The U.S. Naval Observatory (USNO) maintains UTC time at its control center in Colorado. The control center periodically coordinates the atomic clocks of each GPS satellite. 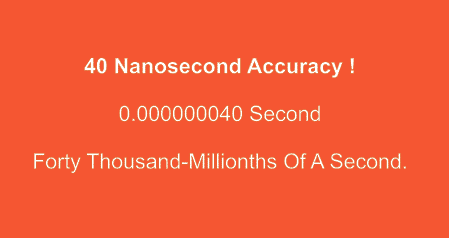 USNO ensures that the GPS signal has a time transfer accuracy of ≤40 nanoseconds (one thousand-millionths of a second) 95% of the time.

This accuracy is only attainable to a GPS receiver at a fixed location.

Is GPS Time The Same As UTC?

UTC time is linked to the rotation of the Earth. This rotation is not constant, in fact it is generally slightly slowing, and can be affected by events such as Earth quakes.

Periodically, leap seconds are introduced to keep UTC time within one second of the Earths rotation time.

GPS time is not adjusted for leap seconds. Therefore, GPS time diverges from UTC as each leap second is introduced.

However, GPS messages provides a warning of impending leap seconds and also the current GPS-UTC offset, so that UTC time can be accurately calculated by a Earth located receiver.

What is the GPS Clock ?
Learn more about GPS Time Servers here.